After removing the brake drums to rebuild the brakes, it was evident that the brakes had already been re-done shortly before the car was parked. The shoes were in good shape, but the drums should be turned, however for the time being we opted to just put them back on as-is. We replaced all four wheel cylinders and both front brake hoses. The rear brake hose is oddly located near the tail end of the transmission since Buick in 1960 was still using a torque-tube design, and that is where the pivot point is located. This hose appears to be in good shape, and since we can’t buy a replacement hose off the shelf, we’ll let this one ride for now. We’ll have to get one custom made and install it later. Marty re-built the master cylinder and installed it. The power brake booster is luckily still in working order.  Here’s a shot of the car back on the floor after bleeding the brakes. It’s wearing its brand new wire wheels and whitewall tires. 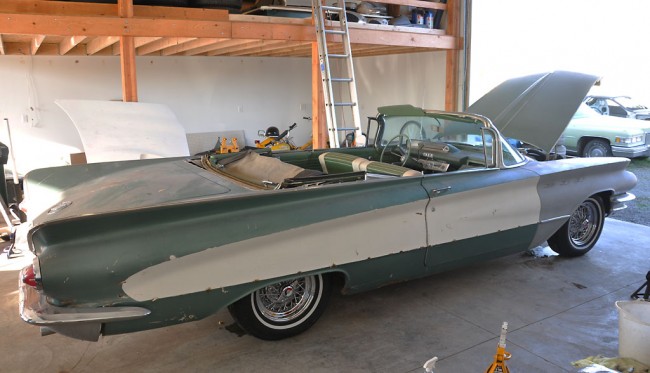 Back on the ground with the new Skylark wire wheels mounted. Brakes have been rebuilt and bled.