We fired up the engine and she was running OK but not very smooth. Marty determined that it we were getting weak compression on two cylinders on the passenger side. While running the engine, we would occasionally hear a bad sound… “tink”, then some time later … “tink”.  What the heck could that be? “tink, tink”. Maybe heat expansion in the exhaust manifolds? Weird.. very weird.  After chocking it up to strange, but apparently harmless noises, Marty revved it up good several times, wide open. Some mild lifter noise, but mostly quiet.. then “tink”.  What the heck!?  Then after letting it settle down to a low idle, it suddenly chugged a few times then stopped dead… NOT a good thing. Dinner time! We went and ate some BBQ steak and then back to the engine. Tried to start it up again, nothing.. it’s stuck! While looking at it in  amazement, a battery cable started smoking… Marty yanked it loose from the battery. The starter had engaged but wouldn’t let go since the motor was stuck.  Ok… back to perplexing… Marty turned the motor backwards by hand, then forward again. It would stop every time. Something was in one of the cylinders causing a clearance problem! D’oh!!! Spark plugs removed and inspected… no damage on the end of any plugs. A magnet on a stick later… we find there is a BOLT inside the #7 cylinder (passenger side, rear).  Son of a &^#@%! Best we can figure, when disassembling stuff a bolt, possibly a carburetor mounting bolt, fell down between the intake manifold and the valve cover. It sat there un-noticed, waiting to fall into the intake port when I pulled the manifold off. If only I had been smart enough to check inside the ports before putting the manifold back on! So it was time to tear it back down and remove the head to inspect the damage (and get the friggin bolt out!). 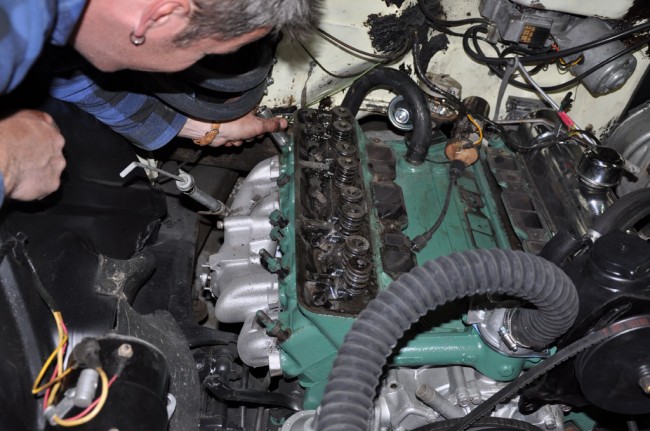 Tear it down again

After removing the head, we discovered a bent valve, a broken valve guide and a dinged piston top. Luckily the piston was not cracked or tweeked, nor was the rod. It still comes to the top nice and level. Also, there is no evidence that the bolt had rattled around in the cylinder at all… maybe not even once! Carbon deposits are un-disturbed, spark plug is not damaged, etc. Marty figured that the bolt was too big to get past the intake valve, so it sat there in the intake side going for a ride, occasionally sliding into the path of the valve, at which time… “tink”. When the engine went to a low idle, it finally got caught in-between the valve and the seat, which bent the valve, which then hit the piston. With the valve bent, the clearance was big enough for the bolt to get through. Did the bolt rattle around in the cylinder a few times? Maybe, but there doesn’t appear to be evidence that it did. Maybe when Marty jockeyed the motor back and forth a few times manually, that could be when the bolt fell through. That’s the theory anyway.  We got very lucky that a lot more damage was not done. 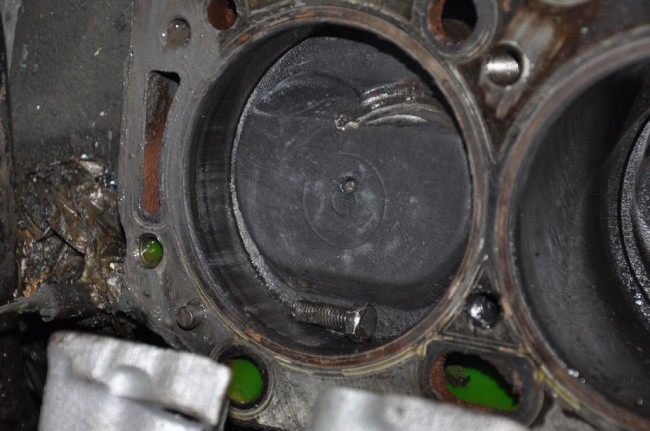 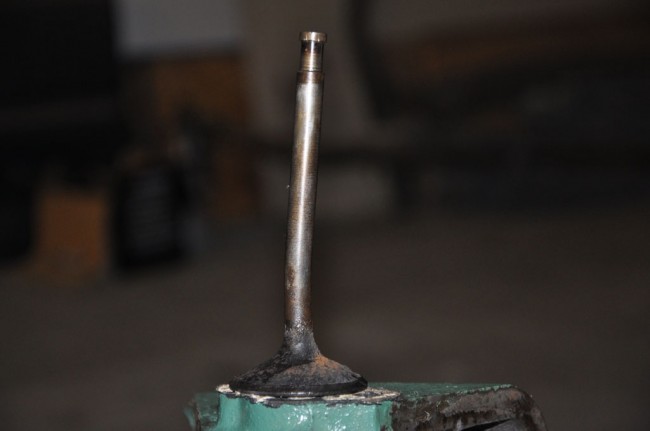 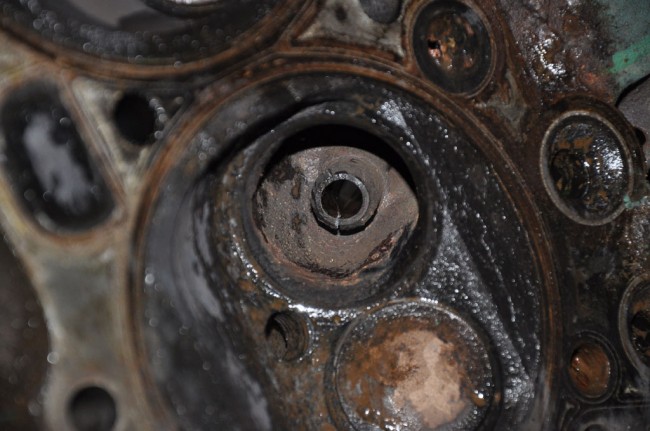