I finally was left stranded by the Buick. About 30 minutes from home, I stopped at a gas station to use their ATM. When I came back out, it wouldn’t start. It wouldn’t even try. Just a single click, and that’s it.  Having no idea what happened I called Marty for advice. He had me try some tricks like whacking the solenoid with a crow bar I had in the trunk, but it made no difference. The headlights did not dim when I would engage the starter, so I guess this means it isn’t stuck and drawing a lot of juice. After about 3 hours, my dad was able to get away from work to come give me a tow-start. Fortunately I had read in the service manual that you could start a Dynaflow equipped Buick by putting it into low gear and towing or pushing it. We had to get it up to about 35-40 mph before it would start.  I drove it back home and took the starter out to find that the gear had been completely reamed off, and the brushes in the motor were broken and ground into small bits, which also destroyed the armature while it was at it. DOH!  Apparently the starter had engaged while I was driving it… which, obviously it isn’t supposed to do… but, considering that the starter button is part of the throttle linkage, apparently whatever mechanism bypasses this while the motor is running must have failed. I have yet to figure out what the problem was. I have a new starter installed now and it seems to work just fine. Oh well, I’m putting the car into storage for the winter and will figure it out in the spring when I get the car back out.  I could install a starter button under the dash and just disable the original switch, but I think its pretty cool how it works and would like to keep it that way if possible. 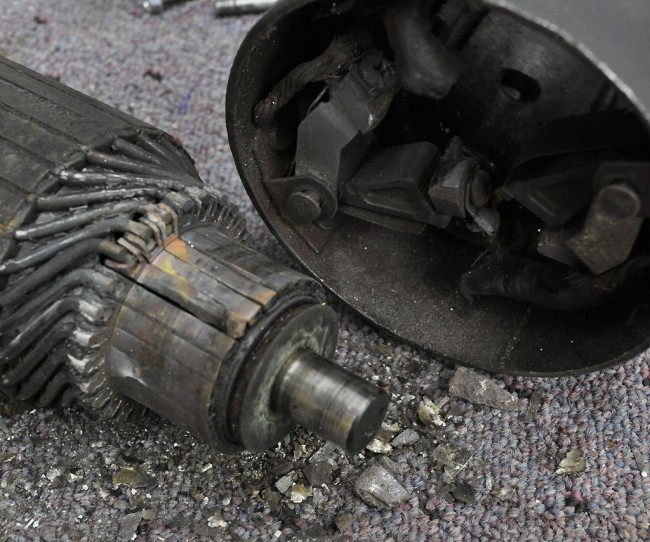