It’s been just over 4 years now since I bought the Buick and over 3 years now since I last posted to this blog. I still have the car, but after the initial repairs were done, very little has changed. I haven’t done any more restoration work to the car. It’s been driven just over 3000 miles since then, with a total of 14207 on the odometer (I’m sure it’s rolled over once).

The starter issue from the last posting was fixed by installing a rebuilt starter. It was never quite the same though, as the starter would occasionally grind, but it was manageable, and for as often as I was driving the car, I just tolerated the problem. That is until mid summer of 2013, when it apparently ground itself enough to no longer properly engage with the flywheel. That parked the car until now because I didn’t have time to work on it. I removed the starter and saw that the gear was actually only chipped on the leading edge, so why this was preventing it from working I don’t know. I figured perhaps the solenoid went bad and wasn’t engaging all the way. So I replaced the solenoid, but it didn’t change a thing! So rather that mess with it, I bought a rebuilt starter from a dealer on eBay and put it in. Now it engages fine, but it won’t let go! The starter will not disengage or stop cranking! The only way I could get it to stop was by  yanking off a battery cable. Turns out this is a problem that occurs with these old Buicks with their strange carb-mounted ignition switch (operated by pressing the gas pedal all the way to the floor). The wiring system for the ignition is a strange one that I don’t even fully understand or can explain. Bottom line is, the service manual suggest that I should replace the starter relay. No biggy right? Well, you can’t buy this part new anymore! It’s a strange relay with 4 connectors on it, mounted on a bulkhead on the left inside fender skirt behind the battery. Looking on eBay, I see that you can buy them NOS…. for $125 or so! Yikes! Not the $30 I thought they should be. Well, after Googling a bit I found that you can buy a similar replacement part that is supposed to work. You can find this part online for about $45 or so… it’s GM #1116969.  The original part was very close… GM #1116967. The difference? Something to do with the original being only rated at 6v continuous, while the new one is 12v.  Anyway, the newer one is supposed to work, but I got lucky and was able to buy an original one off eBay for $66 after shipping… I figured rather than spend $ to try something that MIGHT work, I’d go a little extra for the “correct” part.  Not that it matters, but it turns out that this relay is a something GM was using as a general-purpose relay on all sorts of different things, such as the rear power window on a 1960 Oldsmobile wagon. So after installing this part, the damn thing still won’t disengage! Wasted $66.00. What’s wrong with it? No idea at this point.

Here are a few shots of the car…. one with the wide whitewalls I ran for one summer. They SUCKED bad! Dried up old bias-ply tires. They look cool, but they are a nightmare to drive on. 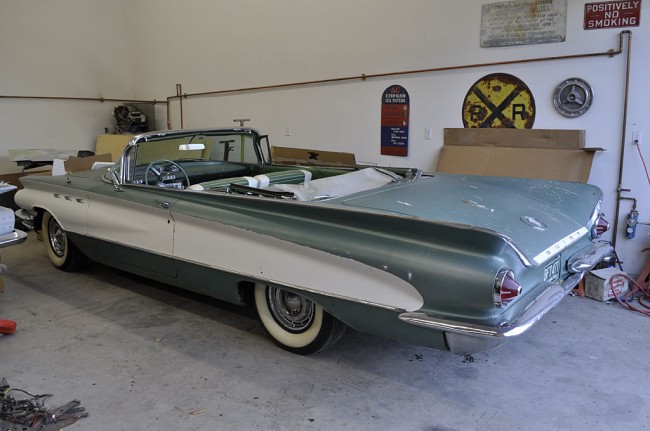 And how the car looks today, up on jack stands while I figure out this starter crap.